Out There :: Out There Classic :: Strategy and Gameplay Discussion

Hi. I finished the games several times and gone through all the 3 possible endings.

Then I did a run just to chart the game universe. The form of the universe seems to be the same almost always, with more randomeness as you advance farther away from the start.
The plot stars (endings) seem to be in a similar position most of the time however. The Star Iron AI civilization stations seem to be randomly distributed. Same with the empty ships. People Death always show up when you explore system 30 or 31, after which the universe become harder to navigate as many planets are occupied.

I have charted 183 stars. The lower 2 quadrants have sections that are extremely tricky (stars very far apart) and you need to be amply provisioned with oxygen and fuel. Also, this area seems to be quite disconnected from the plot stars that tend to be positioned 90 degrees on the border of the right quadrants.

I used a sphere ship. Properly equipped this is the best ship in the game as it starts with a high ecosystem. As another user pointed out, the cryonics and shared cryonics are a waste of space, even though they jointly increase the ecosystem on a lower spec ship. The sphere ship has 20 slots, good enough to use power slots for the space folder and interplanetary reactor, protect it with shield and 1-2 add-ons and also to use fancy techs for exploration (ansible & interferometer). Once I charted the entire universe I removed the ansible and used the map to move around safely.

Throughout the universe I created 3 bases in abandoned ships, where I ferried all possible resources. Here I woudl repair the ship and build technologies and store the Omega to avoid losing it in random space events. I managed to gather 12 Omega during the game (used 1 when I was cornered and 1 to create the red end wormhole). The rest 10 could have been used to create an infrastructure of wormholes between different black holes. After planet 120 I got a bug where I couldn't encounter life anymore (the menu disappears and you have to restart the game from the last automatic save). The bug also prevented getting the high level achievement to know all alien races.

There are no secret planets or Easter Eggs in the universe (or none I could find). I went to the margins of the universe with the highest techs available to increase the telescope range (wormhole, lens). The game universe is finite :-))

Weird occurences and other info:
- at the beginning of the game I forgot the Drill Tech. I had to survive with the one on my ship (and trying to avoid switching to another ship just for the drill). Once I learned the Planetary Expansion, I addeed it to the Drill; in this case only the Planetary Expansion breaks when pushed to the max.
- Gravity Sails, Solar Sails and Interplanetary reactor broke 5 turns consecutively in one system (lower quadrant); this was either a random occurence, or the lower quadrant has different randomize factors (to make the game harder in that area).
- in the lower quadrants there was a galaxy arm consisting of 25 stars with no habitable planets (hence no oxygen); you had to bring your own or create more with the life seed
- counted 25 Star Iron stations
- found 20 abandoned ships
- got to day 1600
- game score 53760
- any ideas how the guys on the leaderboards get to 151.000 points? I thought that maybe by combining endings the score is increased but it tends to stay the same between game won in different ways.
- there is a bug when displaying the final stats at the end of the game when the numbers have 3 digits

Re: Charting the known universe

Nice post.  My last run was just like yours.  I charted 180 something stars.  I had the sphere ship, I got 16 or so omegas.  I spend 14 creating and traveling through black holes.  The last 2 I used on the red ending.  I boarded every ship I could find, used every station, and learned all alien words except for a few of the elements (helium, thorium, etc.). I scored around 55000 and I can't think of how to score higher.  How are people getting 150,000?  I'm calling bs on that.

I will say that while at a point some alien planets bugged out, I would still encounter some that worked.  I wasn't paying attention but maybe they were duplicates of races I already found? Otherwise I'd like to know how I have so many Omegas and only 5 races found.

Also, I feel that the interaction when traveling to new stars stopped as well.  When visiting a new place, 4 out of 5 times would result in the screen flashing with no interactive message.

There is also a secondary message I often get early in the game.  Something like "I am unable to explore this <something> type planet.  Doesn't seem to affect anything. 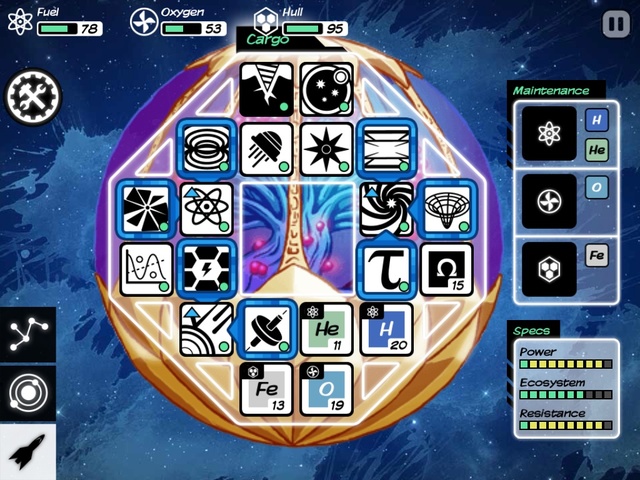 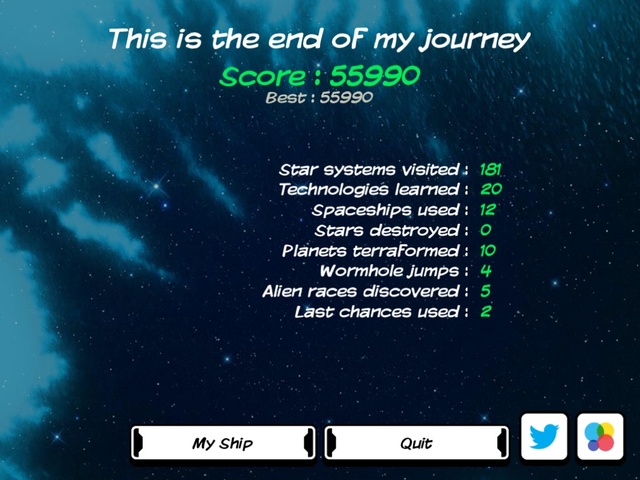 Out There :: Out There Classic :: Strategy and Gameplay Discussion