Firstly I want to say that I love the game, and I have not enjoyed many new games that were developed beyond 2005.  I find them all too easy or not interesting.  This game is both difficult and really intriguing, and I love the aesthetic of your game.  So thank you for the experience; I've beaten it once after many deaths and still want to keep playing.

Having said that, here was my situation.  Normally I do not use the Life seed as I find the other upgrades better - I can usually find a garden planet in enough time, without using cryonics/shared cryonics.  All I do is reserve one spot to save 20 oxygen, so if I can't find another garden planet, the 20 oxygen (again, just 1 slot) keeps me going until I do find one.

When I came across the Manta ship in one run, an idea occurred to me for a new tactic.  Normally, you need to probe/ultraprobe for fuel, but for this ship can use oxygen as fuel; in fact, oxygen is the preferred fuel for this ship.  Since it resembles a Manta ray, I assume that means this ship is a living ship, in some sense.  The idea I had for this ship was that since probing fuel is difficult for this ship (since He is useless to it and H doesn't give very much), I could simply refuel at garden planets.  I also had planetary expander, which means I would yield even MORE oxygen than normal.  In this sense, I could replace probe/ultraprobe.  AND I could use the Life Seed in an emergency, provided that I have an Omega.  This means I could carry around Life seed, and Omega.  This is somewhat less space-efficient than using a normal ship and just carrying around 20 oxygen, because 20 oxygen is 1 slot and Life Seed + Omega is 2 slots.  But I wanted to try a new tactic.

At this point, any developers reading probably already know what happened and what my problem was.  I hit a long dry run of garden planets.  I had one Omega and Life Seed.  Without much fuel left, I terraformed a rocky planet and landed on it, refilling my oxygen.  Here it was: 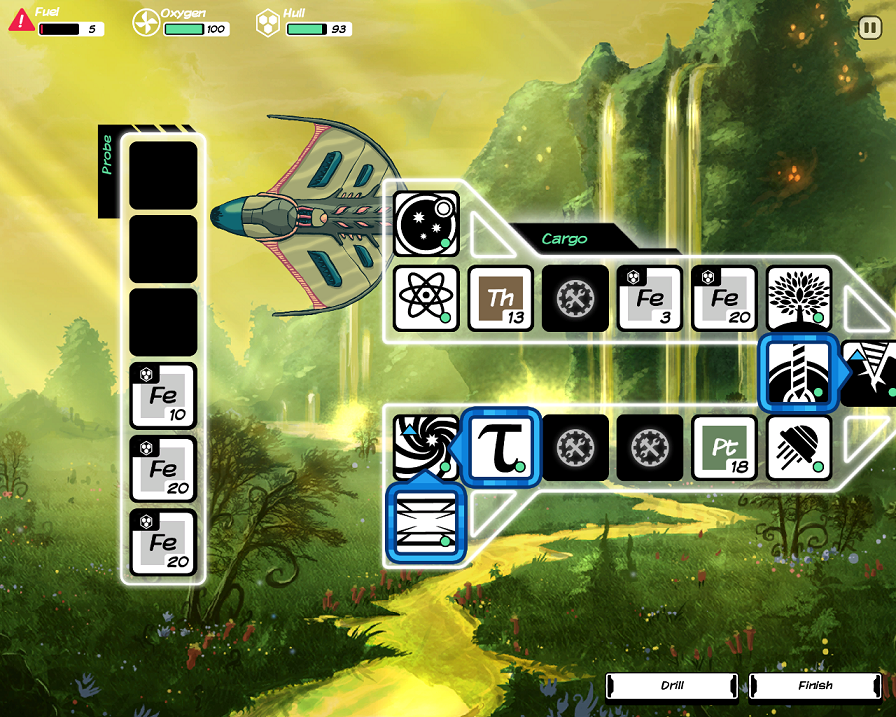 As you can see, I cannot continue because I have no fuel, but... two things:
1.) I am using a ship that "breathes" oxygen as its primary/preferred fuel type, but it does not refuel on an oxygenated planet.
2.) When I drilled here on this (terraformed) garden planet, all I get is Iron, which I assume is what the planet originally had as minerals (before I terraformed it).  Note that when you normally drill at garden planets, you always mine oxygen.  It's strange to "mine" oxygen from the ground, yes, but this was probably designed this way for balance, so you can't just "collect free air" and get endless stacks of 20 oxygen without any cost.

To me, this is was the most awkward loss I ever experienced, because I feel that either the Manta ship should automatically breathe the oxygen and refuel itself when landing on a garden planet, OR, the mined minerals of a rocky planet (iron, hafnium, etc) should change to those of a garden planet's (gold, copper, oxygen, etc).  I know that one might be inclined to say, "Even though you terraformed the planet, it wouldn't make sense that the minerals underneath the ground change to new minerals (gold, copper, oxygen, etc)." But it also doesn't make sense to begin with that gold, copper, etc are only found on garden planets.  In our understanding of the game, rocky planets have iron, hafnium, etc, and garden planets have gold, copper, oxygen, etc.  If the players are to believe that the terraform function can create an alien race (with a language, and so on), then I think it's also acceptable (and expected) that the terraform function changes the mined minerals as well.

I see several solutions, if you guys do agree that this is an inconsistency/issue:

1.) Reconfigure the planet's minerals to a garden planet's minerals (including oxygen, of course), if terraformed.  I think this is the best (and simplest) solution.
2.) Leave the minerals as they are (iron, etc) on terraformed planets, but the Manta ship should automatically breathe in oxygen when landing on any garden planet (including terraformed ones), refueling itself.  But this may make the Manta ship too good?
3.) Leave the minerals as they are (iron, etc), BUT, ADD oxygen to its mined minerals pool.  This is probably the most awkward solution, but there would at least be a way to collect oxygen in its item form, on a terraformed planet.